Angela Huffman lives in Louisville, Ky where she owns and operates her quilting studio, training center and APQS dealership. She learned to quilt when her triplets were born and enjoys stitching with them. She is a blue ribbon quilter and  is the Co-Host of the Fons & Porter’s Love of Quilting, a national PBS television program. Her instructional videos and online classes can be found at quiltingdaily.com, APQS.com and on her website, QuiltedJoy.com.

Angela has been featured in a variety of magazines including Love of Quilting, QuiltMaker, Quilter’s Newsletter, Machine Quilting Unlimited, and On Track. A former nominee for US Machine Quilter Teacher of the Year, Angela is committed to teaching others as she travels both nationally and internationally to guilds, studios and quilt shows teaching piecing and quilting techniques on both domestic and longarm quilting machines all while developing  patterns and tools to make longarm quilting easier.

Prior to having triplets, she was an Emmy award-winning television producer and she can still be found behind the microphone as a voice-over artist for television and radio. Angela owns QuiltedJoy.com where she oversees a gaggle of happy renters who come in to finish their quilts on her many longarm quilting machines under her careful guidance.  www.QuiltedJoy.com 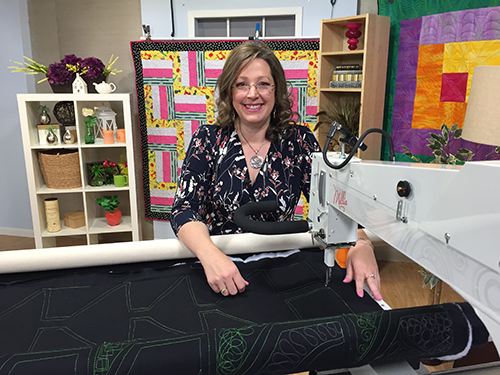 book Angela to teach at your guild or event