Halloween with a Shriner, AKA Pap-Pa Jay 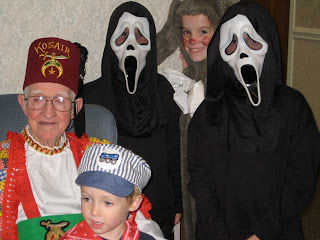 I’m finally getting around to sharing my kidlet’s Halloween photos.  This year we went trick or treating at their 90 year old great-grandfather Pap-Pa Jay’s assisted living facility.

He recently moved in there and seems to be doing well.   This year my grandfather dressed up in his old Kosair Shrine Oriental Band costume which is really more Arabian garb than Oriental in nature. This band performs all over town and raises money for the local children’s hospital.   The leader of the band is called the Genie and he belly dances while the band plays.  He wears a huge feather hat and wields an enormous curved Turkish sword or scimitar (really, I’m not making this up.  And you thought you knew a lot about Kentucky already, didn’t you?). 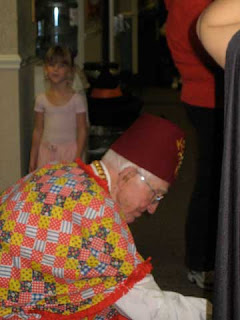 The band participates in local parades. My grandfather would turn off his hearing aids and blow the heck out of this high pitched flute thing that was his instrument.  I remember my grandmother relegating his practice sessions to the garage, as the sound of that flute would pierce right through you.  Anyway, his costume has a shawl that really caught my eye.  Isn’t that a traditional quilt block?  I’ve seen that costume many times but I never took note of that part of it. Anyone know the name of that quilt block?  I think I can find a quiltey connection in just about everything!

The little conductor is my third cousin who is a ball of cheek-pinching-cuteness.  The bunny is GooseyGirl and the two ghouls are BirdMan and RocketMan.  They enjoyed people saying, “Look, twin ghosts!” and afterward they would inform them, politely of course, that they were triplets and the big rabbit over there rounded out their group. 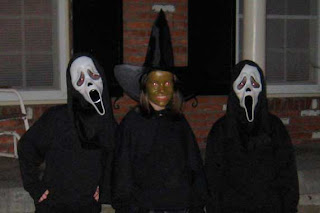 They got gobs of candy but on the drive home GooseyGirl said, “Mom, I think having a Halloween party at the nursing home is kind of a scary place to be. Some of the people there were really, really old.”  Hmmmmm……… I know, her comment was a learning opportunity to discuss how a person’s age doesn’t change who they are inside.  But secretly I was agreeing with her a bit.  There was one lady in particular who looked really frail, sort of out of it and very weathered but when we passed, she leaped out of her chair and came running right up to my boys. I felt my heart lurch! 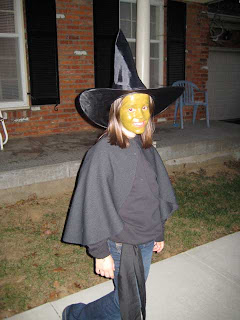 On Halloween night itself, GooseyGirl decided to be Elphaba, the wicked witch of the west from Wicked.  I took my kidlets to see the musical in Chicago and they LOVED it.  They got sacks of candy and had so much fun! I do hope that next year the boys pick out costumes where I can actually see their faces!  You’ll just have to trust me that my two boys are under those ghoul masks. 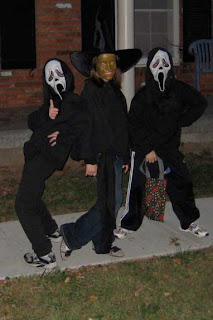 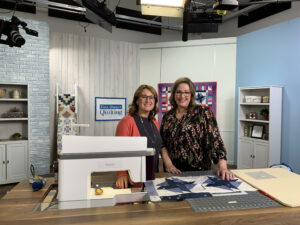 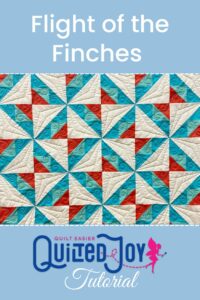